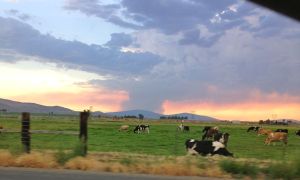 Wildfire in the distance near Adin, CA

Reno, NV to Klamath Falls, OR – I entered civilization again and headed past Reno to Susanville, CA. I passed one “road narrows” sign and then another.  The elbow room was getting smaller.

It’s always interesting, driving into a new state, to see what local laws they feel you need to know.  The first sign I saw over the California state line informed me that it was against the law to abandon animals — a $2000 fine.  So much for expecting to find a stray two-year old black lab trotting down the side of the road in this state.  In Nevada, the first sign after “Welcome to Nevada” was a dancing cow.  Open range, watch for dancing cows.  I needed to remember to take a picture.  I longed for Nevada and the open empty road but she promised to be there when I returned.

Heading into the hills of northern California, I learned the town of Adin was on fire…and, according to signs, I shouldn’t pass snowplows on the right. My last stop before Klamath Falls was Tulelake — home of the Honkers — and home to a small brown sign that said, “WWII Segregation Center” also known as the Tule Lake Unit.

I’d missed paying homage to the one in Delta, Nevada, and turned at the sign. To my right, a chain-link fence with barbed wire at the top facing out encircled 40 or so small houses, not unlike barracks. But the barbed wire faced out, to keep something out. I drove about three miles down the road through fields, only finding the Tulelake Water Treatment Center which looked historic but wasn’t the internment camp. Backtracking to the highway, I noticed a small, maybe four-acre area opposite the barracks. The barbed wire around this area pointed in, to keep something in. People.  It was leveled if any structures had been there, except for a small building which a National Park sign stated had been the paint shop for detainees (see picture, one building).  I held a moment of shock and silence. The two internment sites I’d tried to see were both leveled and both were in the middle of huge valleys, far from the mountains.  The greatest feeling in me was that there was nowhere to run, if you could get out. The inward facing barbed wire once held persons of Japanese ancestry — mostly Japanese American citizens — in tiny, guarded, isolated units.  They were forced into these concentration camps by an executive order of then-president Franklin D. Roosevelt back in 1942.  I couldn’t imagine living in the fishbowl centers of these immense, flat areas, against one’s will, in a country built on freedom. Then released, with the structure of the place flattened as if to make it smaller, the memory possibly easier to forget.

I felt small when I pulled into the Klamath Falls KOA, even smaller when the woman at the counter told, instead of asked me, where I would camp — a stubbly tent pad with used earplugs and glow-sticks littering the ground. Still, I was not as small as the Japanese Americans were made to feel, both during internment and in the memory after.  There had to be more to this saga.

Sunset and wildfire outside of Tulelake, CA