Sewanee, TN – I remembered what the ranger told me in Arkansas: “Everything here is poisonous.”

I was trying to adapt to life in Tennessee but it seemed like everything was poisonous here too.  Being a newcomer, my first conversations centered on the things that could get me.  My cousin held up her hands in a circle to show me how big around the copperhead snake was that she’d seen on the trail one morning.

“But you don’t have to worry about the big black ones.  Those are rat snakes and they’re harmless.”  I was not comforted.

I was still itching around my waist from the chigger and mosquito bites I sustained during my day of weeding the garden.  A skirt I wore the other night also provided easy access to a swarm of mosquitos so now my inner thighs itched too.  I wondered what the world record was for mosquito bites.  As long as I didn’t get a tick, I knew I would survive.  Something about an insect sucking my blood and becoming part of my circulatory system made me extremely uneasy. 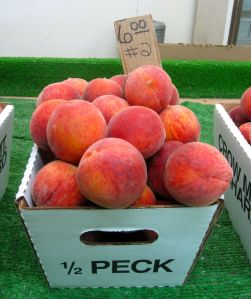 My cousin and I started the day with our usual concentration of coffee and her friend, Meredith, picked us up for a trip to Crow Mountain Orchard in Alabama for peaches.  Driving down off of the Cumberland Plateau, we could see farmland for miles.  Green trees followed the Tennessee River down to Tom’s Ford, a lake where, in the muggy summers, life revolved around the water.  We jumped a foothill and landed in Alabama, my first time to the state.  The fields unfolded around every turn and eventually we reached the orchard.

Hiding our excitement at our early arrival and still-available peaches and blueberries, we devastated their supply as less-than-early birds walked in.  A kind man helped us load the car.  We had one stop to make on the way home.  Meredith explained that we were stopping to exchange peaches for beets at the home of a man who did some masonry work on her home.  He stayed in touch with her after he’d finished the work and was an amazing gardener.  His modest home was located next to a cemetery.

We drove down the lane and Meredith shared his story.  His daughter had been murdered a few years ago and justice had never been served.  Meredith, a retired lawyer, looked into the case but was unable to get the state district attorney to pursue it.  Then, just a little while after the murder, this man’s son had been killed in a truck accident.

“Out here, there just aren’t the same rules.  Kids can ride around in the back of a pick-up truck and no one says anything.  Accidents happen and it’s just part of life.  Sometimes I don’t get it.”

“It seems like people in rural areas live a lot closer to tragedy,” I commented, thinking about the losses I’d seen in the area of rural western Washington where I grew up.  It was true.  There were fewer rules, and the price for fewer rules was more accidents.  Many people I knew had lost a loved one or lived with a disability from times when there was less law enforcement, less OSHA, less government regulation.  Loss was a part of life in a rural community and the people dealt with loss in the same self-determined way.  Families kept those with disabilities home, quietly caregiving – it was the only option to institutionalization which often was too expensive anyway.  Those who survived the accidents lived on, trying to come to a new sense of self in a self that was no longer whole.  Grief, too, was unspoken and the families continued to operate under its heavy blanket, muffled and moving at a slower pace, sometimes with the accepting support of family and church, sometimes not.

No one answered the door at the little doublewide trailer next to the cemetery.  The corn in the neighboring field stretched higher than my head and waved in the wind.  We followed Meredith to an extensive garden, a kitchen garden as non-commercial gardens here are called.  We began to pick a selective few beets.  In the sandy soil, they drew out easily, fat and purple.  We topped them and left the greens to become compost, food for the next generation of vegetables.  Eventually the gentleman came outside to see us, followed by his grandson whom he was raising. 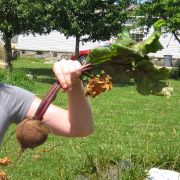 “You pick all you want or they’ll go ta’ waste.  My wife doesn’t think she’ll have time to do anything with them this year,” he said.  His grandson hid behind him and stuck out his tongue at us.  The man was so slight; I wasn’t sure how he’d been a mason.  He looked strong though in his Nascar t-shirt.  He filled Meredith in about recent testing he’d had done on his lungs.  It sounded like something related to his work as a mason.  He would start treatment immediately.

We picked beets and cheered on the grandson who was testing his shot at throwing beets into the paper bag.  His wife came out to give us a jar of her pickled beets which I knew would be tasty with a kale and goat cheese salad.  Saying goodbye and many thanks, we winded back up the plateau.

Feeling the tragedy of this man’s situation, we changed the subject which inevitably wound its way back to poisonous things in Tennessee.  Ticks were the topic this time.

“You just have to check yourself a lot,” Meredith told me.  This after she assured us that water moccasins do indeed live in Tennessee.  I had been reading about ticks in my spare time.  The female tick is the one that bites.  She attaches herself with a glue so strong that she can’t pull out until her body releases a chemical to dissolve the glue.  Wives’ tales about lighting a match under her back-end were bogus.  Once she attached, her muscles were not strong enough to pull out.  Once fed, her body would create a solvent to dissolve the glue.  The most common tick on the Cumberland Plateau was the Lone Star tick, so named because of a white dot on her abdomen.  They burrow deeper than other ticks but are less likely to carry Lyme’s disease.

We thanked Meredith for the ride, her tips on recipes and vast amount of local knowledge.  Our work was cut out for us with the huge bags of beets since I couldn’t let good food just go to waste.

After processing the beets later that night we went to bed.  I lay thinking about the man we met and how unfairly life deals cards.  I reached down to scratch my plethora of mosquito bites one more time.  One part of my leg felt like something was crawling on it.  I reached down and felt a mole.  It squirmed.  I grabbed it in my fingers and yanked, feeling whatever it was grab at my skin.  With fingers clenched, I turned on the light.  It was a tick, flat and writhing.  I stabbed it with a pen until I was sure it was dead.  I checked myself and the sheets to be sure there weren’t anymore.  Feeling like my skin was crawling, I fell asleep.  While I still was a long way from tragedy, I was closer to the wild than I’d felt in a long time.