Denver, CO, to WaKeeney, KS – My radio was tuned to local livestock prices on my drive from Denver to Sewanee, TN, when the public emergency buzz broke into the station.  “This is the National Weather Service with a Severe Thunderstorm Warning for Northern Trego County in West Central Kansas.  Severe thunderstorms were located 7 miles north of WaKeeney and moving southeast at 10mph….Hazards include quarter-size hail and 60mph wind gusts…Hail damage to vehicles is expected.  Expect wind damage to roofs, siding and trees…”

I actually knew where I was for once.  The dark mass of clouds ahead was the storm and it was getting harder to steer in the wind.  I told myself that the clouds were not moving in a circle as I passed a sign for the little town of WaKeeney, population: 1,852.  I merged over to exit as the Colorado car in front of me leaned out the driver’s side window to take pictures of the storm.

At the gas station, an older local gentleman and the cashier told me I should wait for the storm to blow over the highway before heading to Salina, KS.  It would just be an hour or two. There was a McDonald’s down the road, and a Pizza Hut.

“Get’cher self some dinner and it will be over when yer done,” he told me. “There’s also the Saloon on Main Street.”

The Saloon sounded more appealing and was easy to find. Just stay on the paved roads which look used. I stared at the clouds. They looked like someone mixed the ocean with whipped cream and threw it into the sky, expansive and dark and swelling. 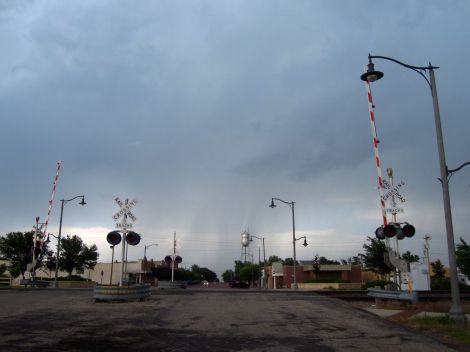 In downtown WaKeeney, a window sporting white letters in a cowboy font announced the Western Kansas Saloon. I parked in front, wondered what I would need to pass the few hours I’d be there and grabbed my bag. Inside, the old hardwood floors had the wear of work boots and, along a ledge by the ceiling, lights lit up huge prints of farm and hunting scenes framed in black oval mats. Stretching from floor to the ceiling was a 30-foot Christmas tree, still decorated and lit.  WaKeeney is known for their annual Christmas tree lighting, and for Orrin Upshaw, an Olympic tug-of-war athlete, according to Wikipedia.  It is the county seat for Trego County.  The only other incorporated town is Collyer, population: 131.  The county is almost exactly 900 square miles, mostly farmland.

Three men with black t-shirts, camo pants and creative dental work sat across the room and eyed me when I walked in. I nodded and later I found out that they were from New Mexico. I kept myself busy fiddling through my bag until the waitress walked over. I knew that I did not look local but she was kind enough to treat me like one.  She told me about her specials, including tortilla soup which she had suggested because they needed variety.  I confessed that I was uneasy about the storm.

“You’re fine in here,” she told me and then pulled out her phone to show me last week’s pictures of hailstones.  They were the size of golf balls.

“Should I move my car?” I glanced out the window to see my trusty Toyota Matrix being pelted with rain.

“Well, you could. I guess you could move it down to maybe the bank. But I wouldn’t worry about it.” She took down my order for tortilla soup and a Budweiser. “That’s what your deductible is for. I haven’t even submitted my claim from the last storm.”

I raised my eyebrows and she told me that she thought my car would fine.

“I’m headed to Tennessee. How did you end up here?”

“Aging in-laws…ex-inlaws, I guess now.  One with Alzheimer’s and then the other one got dementia too.  They’re in facilities now. And my ex-husband still had the farm so I help him. It’s just like that. I’ll get this stuff right out to you.” She wore shorts and a Western Kansas Saloon t-shirt with running shoes.  That was all she wanted to tell me except to add that they had good facilities in Kansas.

“So, I’ve driven I-70 across before and I was thinking of heading south somewhere and driving through Arkansas.  What do you think of Arkansas?”

She shook her head.  “You don’t want to do that.  Arkansas has terrible highways and it’s just…there’s nothing there. What I always do is go through St. Louis and then head south. Take I-24. I guess Arkansas is okay but we got flats. The highways are just bad.”

The men across the room laughed and she walked over to check on their meals.  I plugged in my laptop and watched the satellite images of the storm pass in red across I-70 barely east of where I sat. Outside the rain had eased.  I was hoping to drive to Salina, KS and stay there for the night. My dinner total came to $7.61 so I decided to treat myself to crème brûlée.  This suddenly brought my bill up to $13.60.

The satellite image from the National Weather System showed that the storm was south of I-70 now. Three families with teenagers came in for dinner, mostly ordering the special. The teenagers eyed me.  I nodded hello and smiled but they looked back up to the televisions.  I paid my bill and found out that the waitress’ name was Germaine.

“I’ll tell Georgia hello from you when I’m there?” I offered.

“Oh, I miss Georgia. You be safe. Stop in if you come back through here.”

“Thanks. Take care.” And I walked out the door just as an old Isuzu Amigo painted like a duck blind pulled in next to my car.  The man glanced at my Washington license plates and then at me.

“Good storm, huh?” he asked and laughed as he walked into the Saloon.