Seattle, WA to Lewiston, ID – It turns out that I’m a sucker for shortcuts suggested by people at gas stations.  On my way through Othello, WA to Lewiston, ID, I stopped to get gas and walked in with my road atlas.  I just wanted to confirm a route I’d chosen along main highways when the woman in front of me buying a box of Bud Lite said, “You can take a shortcut through the Palouse and it’s way prettier.  It will cut 45 minutes off your time too.”  I was hooked and asked for more information.

“Well, you get off the highway at Washtucna and drive through town.  You keep going out of town and it feels like you’re in the middle of nowhere but about five miles down the road, you’ll see a big grain elevator.  It’s the only one there.  Turn left.  You can’t miss it.”

You can’t miss it.  Those are always the only part of the shortcut directions that give me any anxiety.  I double-check her directions against the map and confirm that the route she gave me will take me past Palouse Falls State Park.  She confirms the route and I’m off with her good luck.

Miles down the highway, I turn off I-90 at Washtucna.  Within seconds I’m out of “town” and driving alone on a south-easterly direction toward the lowering sun.  I make out the shape of something huge that’s dwarfing a full-sized truck following it with lights flashing.  It’s some kind of farm vehicle taking up my shoulder, my lane and over half of the oncoming lane.  With the sun in my eyes, I look past to see if cars are coming and inch around on the oncoming shoulder.  In the distance I see the grain elevator where I’m supposed to turn left.  The lug-nuts on this piece of farm equipment are at eye level.  I pass three of these.  RV’s are the largest vehicle I’ve seen on the road.  I wish my car had a helmet cam to capture this ride. 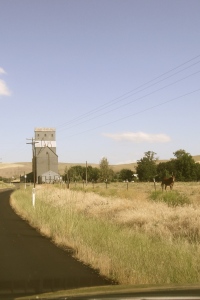 Farmland in the Palouse, WA

Turning left at the grain elevator toward Palouse Falls State Park, I slow for the windy corners and my amazement that little ranches are tucked in in so many of the dry draws once carved by glaciers.  I pull over to let a truck following me take the lead which he seems to want, riding my bumper.  It turns out he can’t go any faster than I can so I let him go.  There’s always a moment of me checking my phone to see that I have no reception and wondering how long I’d have to wait for help.  I don’t worry about who would show up; I trust the generosity of spirit in these parts.  Later in my trip though, I will contemplate what I would do if I broke down in the middle of nowhere.

Driving out of the Palouse down into Pomeroy, I stop to take a picture of a piece of the Lewis and Clark trail running down a hillside.  I wonder how they documented this place.  Ripple-y soft hills cut by swaths of wind-rounded cliffs, thankful for a way to ferry across the Snake River?  Farther down, I drive through Clarkston and then cross the blue bridge into Lewiston.  It took until later in the evening for me to realize that they were probably named after Lewis and Clark.

Friends welcome me into their house for the evening.  I haven’t seen Mike and Laila for seven years.  They look the same except now they have two little muchkins running around who look like them.  We catch up and play “Pass the Pigs”.  We tell their daughter it’s a drinking game but by the end, she’s winning and begging to drink her apple juice.  They kick it family style for the night while I sleep in their daughter’s bed, thankful for the generosity of old friends.

3 responses to “Sucker for Shortcuts”