Beersheba Springs, TN – “Marathon.  Marathon is the Greek word for fennel.  In Latin, it’s foeniculum.  In Spanish, it’s hinojo with a silent ‘h’.  That one doesn’t follow like the others.”

I was receiving an etymology lesson outside a Marathon gas station in Bell Buckle, Tennessee from a man I met at the Grundy County Rotary meeting on Tuesday.  This was the first clue that he spoke six languages, all — I’d add — with a southern drawl.

“The Battle of Marathon was fought on a plain where the fennel grew.  The Greeks fought off the Persians.  And that’s where we get the word marathon.  Although, it means something different to us now, of course.”  Legend has it that Pheidippedes ran from the plain in Marathon to Athens, approximately 26 miles, to spread the news of the Greeks’ victory.  The marathon was born.

I stood with a dripping squeegee in my hand, rather enamored by this man’s professorial ability to make even pumping gas interesting.  The stories were just beginning for the day, making this somehow my place, and tying me to the people and the land.  Just like Marathon, could a place be a place without a story?  And from these stories, we introduce names.  Names go hand in hand with the people who are telling the stories.

The couple I was spending the day with was from the east coast but my professor friend was raised in Alabama.  His family spent their summers at a cottage in Beersheba Springs on the Cumberland Plateau.  Beersheba was pronounced BRRR-shi-ba with a short “i” sound.  I met them at their cottage at 9:30 on Thursday morning, two days after meeting.  The wife greeted me and quickly said she was finishing up a short editorial piece for the New York Times – what if I went down to the Beersheba (BRRR-shi-ba) Springs Medical Clinic to visit.  That might be interesting to see.

The Beersheba Springs Medical Clinic is first of all, free.  All services are by donation or people can volunteer to trade for services.  The clinic opened in November of 2010 alongside state highway 56.  It was founded by Dr. Garrett Adams, a doctor with ties to the area just like my friends – people who summered in an incredible natural setting but who had a heart for local residents nearby suffering from lack of jobs and specifically access to healthcare.  In 2011, Dr. Adams testified before the U.S. Senate, giving first-hand examples of why poverty is a death sentence.  He recounted the stories of eight people in Grundy County and finished his testimony with this: Thank you for this opportunity to speak for those without a voice, who have died or will die as a result of our country’s unwillingness to acknowledge that health care is a human right and to provide affordable, high quality health care to every resident.

I perused the pamphlets from the health department.  A woman walked in and a friendly, peppy CNA in a flowered knit dress joined her at the counter to ask what was wrong.  She explained that she had a toothache and only stopped by to see about getting some antibiotics since she’d had the infection before.

“And you know what pisses me off?” she asked me.  “My nephew spends all his time at my house but my sister is on Families First and she gets dental coverage.”

I asked who had custody.

“She does!  So she’s getting all this work done.” She looked at the CNA.  “Ya know, I think she’s going to get all her teeth pulled on the top in a week or so.”

“So she has custody so she gets the benefits but your nephew lives with you most of the time.”  She’d already told me she didn’t have a job and volunteered at the clinic so she could have medical care.  The CNA was her friend.

The woman had had the infection before and the PA gave permission to fill another prescription for antibiotics.  The woman reminded the other woman that antibiotics usually gave her a yeast infection but the CNA was already counting out pills for that into a plastic pill bottle.

“I KNEW you wasn’t from a’roun’ here!  I knew it when I walked in the door.”  She was proud of herself and I knew that I stood out in my Chaco sandals and rolled up jeans, using the top of my backpack as a purse.

“You gotta try it.  It’s real sweet and has caffeine, just like an energy drink.  I get a headache when I don’t have one.  The cherry-lemon ones, mmm, that’s my favorite.”

The CNA shook her head and gave the woman the pills.  The phone rang and she answered.

She winked at me.  “Yep, we do…honey, you get right over here and I’m sure that’ll be when we start our three-hour lunch break.”

She hung up and waved me back to see the exam rooms since the clinic had just emptied.  I asked about social workers and she told me that one had been coming but not right now.  She’d offered counseling and they needed counseling.

“What about classes?  Do they work?”

“Yeah, we had one last fall on…you know, like diabetes.  They work kind of.  What people really need is someone to talk to.”

I thanked her and said I had to run back to the cottage.

She wasn’t the first person to say this to me.  “Now you know where I’m at” was a usual part of goodbyes.  I asked a friend what that meant.  Was I expected to visit?  Should I invite people over so they knew where I was at?  It turns out that, “Now you know where I’m at,” is just that.  It’s being friendly, a statement saying, now you know here I am located…of course, if you need anything, I’ll be there, but mostly now you know some of my stories and they happened here.  That’s important.  Now you know.  My friend reminded me not to get too existential about it.

Looking out on the valley and Collins River from Beersheba Springs, TN

Back at the cottage and with her op piece sent off to the editor, my friend hopped in my car and we followed her husband down into the valley where the freezing cold Collins River ran alongside a tree nursery which used to be a corn field.  The stories of places.  Her work was in the area of child advocacy, namely the advocacy for childhood.  For years she served as a strong reminding the public and government that technology was neither evidence-based nor proven to help kids learn better – “Dogs don’t look at the sun.  They naturally avoid looking at radiant light.”  She talked about studies of radiant light and how the use of things with screens doesn’t provide the stimulation needed by a child’s developing brain.   More recently, and much to her happiness, her advocacy shifted.  She began to focus on play.

Children, it turns out need unstructured time.  She talked about Adventure Playgrounds where kids can build stuff with real nails and real hammers and real boards.  She trains the play workers who supervised the playgrounds.  They’re biggest job is to get out of the way.  They facilitate and answer questions, there are guidelines for making the playground and kids safe (“But the children can hurt themselves too – that’s part of building and play”) but mostly the worker steps back.  It’s about the children playing.  She’s seen children build two- and three-story tall structures.

We talked about boredom.  She said that’s part of it.  Children learn from boredom.  They learn to find something to do on their own.  (I must’ve been bored a lot because I have a hard time sitting still.)  It’s telling children, “If you need something to do, I’ll give you something to do,” and then suggesting they wash the dishes.  Even my inner child still wants to run outside when I write those words.  The stories of being kids that we love come from our unstructured time – building forts, trying to give the cat a bath, seeing how many servings there really are in a tube of toothpaste.  Could we head back to that?  Yes, please.

Our day in Bell Buckle was complete with antiques, homemade oatmeal cake with homemade caramel sauce, and okra.  My newest Southern fact centered again on food: You know how you cook okra?  You cook the snot out of it. Literally.  When you cook it, it releases a goo that looks like snot.  Cook the snot out of it and it’s done.  That’s where the phrase comes from.  I drove back to walk the dogs before our dinner party and stopped at the liquor store for a bottle of wine.

“Whoa!” I walked in the door to two men behind the counter, one wearing a florescent orange t-shirt.  It was bright.

“She’s talking about your shirt, I think,” said the other man.

“I’m headed to a dinner party and, as much as I’m tempted to buy that aluminum beer can of scotch, I thought I should bring a chardonnay.”

They helped me pick out a bottle of wine made by some boys who’d attended the University of the South in Sewanee. 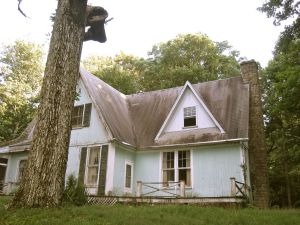 “Beersheba Springs,” I told them, proud that I said “BRRR-shi-ba”.

“My wife’s from there.”  It’s important to have an attachment to a place.

“They say, Beersheba fire department never had a chimney they didn’t leave standing!” referring to the burned houses with a chimney and foundation still in place.  They laughed.

“Yeah, and you know how they train?  All these people who needed a house torn down, they call the fire department.  There was a guy who wanted to build a big house but he had two old houses in the way.”  He ran my credit card for the wine.

“So!” and he flung both arms in the air.  “I told them to call the volunteer fire department and we went over there to watch ‘em burn down!”

He passed me the wine which, by Tennessee state law, must be in a bag.

“If yer up there, my house is just down the Stone Door Road.  I got my porch and my chair.  Wait, I’ll be there after eight or so tonight.  Most peaceful place you’ll ever see.”

He told me it was the first house past something and I said it sounded pretty.  And then I’ll know where you’re at, I thought as I walked out the door.

2 responses to “So Now You Know Where I’m At”